Ecological scientist Carolina Zuluaga has always been fascinated by nature. She grew up in the Colombian countryside and commuted to a city school, boarding with her aunt during school semesters so she could focus on her studies. Before starting a family, her fierce love of science also took her on a very special journey to places only the lucky few will visit, the Galapagos Islands. And soon, she will share her love of ecology with Australian students through Cultural Infusions’ Migrant Science Communicator Accelerator Program.

“My parents were very focused on good education, even if that meant sacrificing time with me. So, on and off after the age of 5, I would live with my aunt or my grandmother during the week in school-times, and return to my parents on the weekends and holidays.”

The commuter’s lifestyle helped Carolina to become more independent, but it came at a cost. She feels sad to have missed out on the comfort and closeness of living with her parents and her younger brother throughout her education.

But she was rewarded for her effort and graduated from high school in 1995, receiving brilliant marks for her final exams. Her high scores meant she could choose to study any field, at any university she wanted.  Around this time, the Greenpeace movement emerged, and the environment became hot topics among Carolina’s peers. Carolina became focused on climate change and other environmental challenges; she felt very strongly about conservation and protection. She chose a bachelor degree in ecology at Pontificia Universidad Javeriana.

“I wasn’t the engineering type of person, and even though I liked maths, I felt really driven by community, progress and saving the world. My course at university was 5 years and then I did my thesis.”

Her thesis was a life-changing event. During the holidays in the last year of her degree, she applied for a volunteer position with the Charles Darwin Foundation (headquartered on the Galapagos Islands) and was accepted. The Foundation offered Carolina a scholarship. It was an opportunity to complete her degree and do her thesis on a controversial biological control program that was about to take place in the Galapagos Islands.

“In Galapagos, 98% of the islands are protected national parks. The remaining 2% is populated, which includes the Charles Darwin Research Station. In 1982 an introduced Australian pest called the Cottony Cushion Scale was reported, and it had caused a lot of trouble to the native plants. But it has a natural enemy, the Australian Ladybug. 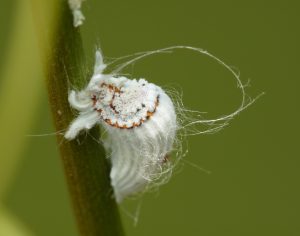 “It’s a big deal to get the approval for biological control. There is a risk analysis involved, approval is needed from the national parks and the government while the whole world looks on. It was the first experience of biological control within the conservation area [and it was a tremendous success]. My thesis was to evaluate the release of the ladybug. It was a fantastic job, and it meant I was able to spend a year and a half in the Galapagos Islands.”

Living in one of the most remote and wild areas on earth might not sound blissful to everyone, but to Carolina, it was a deeply moving experience that brought her intense joy. She spent her spare time free diving with marine iguanas in the Pacific Ocean, and playing with her friendly neighbours, a community of Giant Galapagos Tortoises.

Her version of the Cottony Cushion Scale (called El Pulgón in Spanish) is a wicked villain that kids will love. 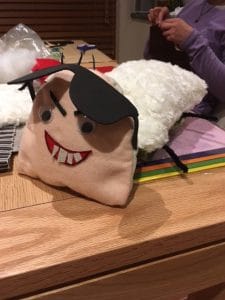 “I didn’t have many expectations, but when I was there it was the most beautiful time I can remember… the nature, and the animals- they are not afraid of humans, there are no big predators, so they’re just natural, you know? You’re eating and they will come to you… it was a paradise, and it changes your life.”

But life outside the Islands had begun to call, quite literally. It came in the form of telephone conversations with her future husband, Juan, who was studying to become a mechanical engineer. Every week and between a stream of emails, Carolina would run across the rocky, unlit island pathways in the dark, all the way to the main office making it in time to answer a ringing telephone.

The pair had never been on a date. They had met in a youth group back home, and struck up a true connection, maintaining it throughout their separate journeys.

“I had finished my thesis and I went back to the continent, to Bogota, to present it.  I saw Juan again, after one year apart, and he proposed to me. We spent three days talking about our stories and I felt it… I felt that he was the one for me.”

Carolina had met some Australian scientists on the Galapagos project who had given her a great impression of the country. She had considered further study in Australia, but chose love instead.

“I got married, and then I got pregnant with my son, and with babies it’s so hard to work in your field. In Colombia it was a very difficult time with violence, crime rates were very high and we saw terrible things with our own eyes.”

Employment opportunities in Colombia at the time were very low. Carolina and Juan were unable to find work. Under pressure to make ends meet, they opened a convenience store in Pereira, where their path took an unexpected turn. They had no idea before they opened the store that the area they had invested in was a territory run by drug dealers, and they were directly exposed to killings and a number of horrifying ordeals.

“We didn’t want our kids to grow up in this environment, so we said let’s get out of here while we can, while the kids are young and we are all alive… lets go.

So their journey began, first taking them to the US in 2005.

“Our second child, our daughter was born in the United States. But we never felt settled there – we were actually having a difficult situation, and we said, ‘let’s try something different, let’s apply for Permanent Residency to Australia’.  We applied and I already told you, I believe in Jesus, and it seemed like a miracle; we got it in 9 months. Our immigration lawyer said he had never seen such a quick approval before. My dream had become a reality.”

Carolina and Juan had no contacts in Australia. They arrived in Melbourne and immediately had to find a home, a school for their children and set up their lives.

“Resettling with two kids, you’ve got to buy everything straight away. There are school fees, we didn’t have references… we didn’t know anyone here. We just got here, hired an Air BnB place, stayed two weeks and found a place to live.”

“So it was really hard. Juan had to get whatever job he could because the bills had started coming. The job he got was on the other side of the city, overnight from 11 to 7, cutting metal. And it was horrible. Every day, he was getting sick, injuring himself. He was miserable.

“I was handing out CVs and resumes [for work in her field], and I would just get nothing.  Juan lasted 3 months, and then decided I had to do something.”

Carolina had started a cleaning business in the US when they’d needed extra money, and she started to clean again in Australia. During this time, her husband had constantly searched for better positions, but hadn’t been able to find a job in his field. Finally, they changed tactics.

“We observed that the only way to get in was through completing a degree here. So, Juan applied for a Masters of Engineering in Advanced Manufacturing Technologies at Swinburne and he was accepted. He got a Commonwealth Supported Place and it was just perfect – he will graduate on his birthday this year! In August!”

Juan is now in a good role as a supervisor in a multinational company, and Carolina’s cleaning business has kept the family afloat during extremely tough times. She called her business “Cleaning Path” and says the name has special significance – Cleaning Path has helped her find a way to make their dreams happen. She currently employs two other migrant workers, and she is proud of the way Cleaning Path gives them key opportunities too.

But mostly, Carolina is eager to return to her great love of science. She was so hopeful when she saw a post about the Cultural Infusion Migrant Science Communicator programs.  It had been shared on social media by a friend. When she was told her application had been successful, she was elated. She wants to show students how important it is to appreciate the things we take for granted, and remind others to value what we are given in life.

“When we don’t bring anything into it, everything is in balance. Everything is made out with a purpose and in balance, so when you see nature and you want to conserve it, you’ve got to aim for balance, because it is perfect.”

Carolina is impressed by the Australian education system and how it offers a tangible, practical learning experience to students. She hopes her own children will find it challenging and motivating.

“I really like how the Australian education system has a lot of hands on experience learning, and I think this is important for them, as they see their knowledge applied to real life and not just theory in their brains. I hope that being educated here in Australia will open a world of opportunities to them for their future.”