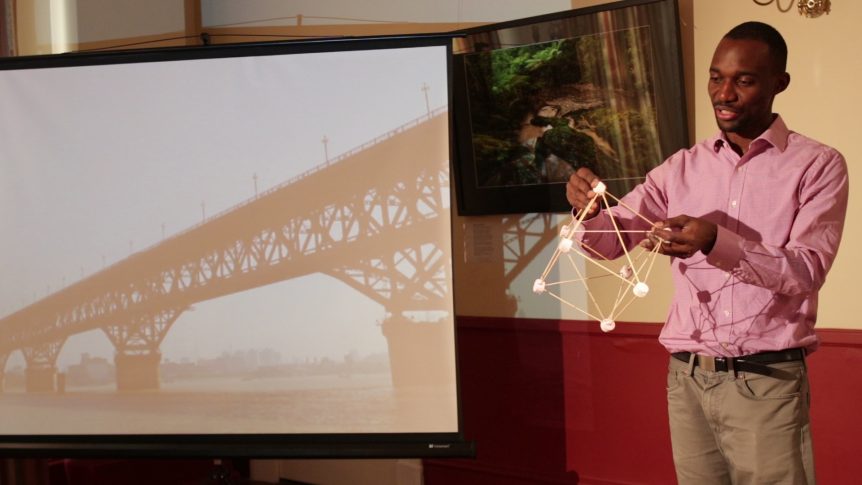 Cultural Infusion is excited to welcome civil engineer Yves Nininahazwe to our African Schools Incursions as part of our new Science program. This new program makes professional scientists from around the world available to Victorian schools.

Yves was born and raised in Burundi, in central Africa, which has a population of 10 million people. After completing high school, he received a scholarship to study in China. He completed his degree in Nanjing city, where he also met his wife. Together they decided to migrate to Australia and build their lives. But civil engineering wasn’t the path Yves originally wanted to follow.

“When I left Burundi, my plan was to study to be a doctor. However, when I arrived in China, I found that many of the students wanted to be doctors. And I thought, well, that is enough doctors. I thought, well, if we have all these doctors, we are going to need engineers as well.

“My decision came from the perspective of what a country needs to develop and become self sustained. It was about the infrastructure that was needed.”

When his studies began, Yves was challenged in a number of ways. If you can imagine what it must feel like to learn a specialised science in a language you don’t speak, then you can see why those challenges arose.

“When I arrived in China in September 2005, I found out people there don’t speak French, and if you are lucky you will meet someone who speaks English. We were to be taught in Mandarin.”

“The first two years of my studies were spent learning the language. At the same time, I was improving my English, because if there was something you didn’t understand, the teacher would explain it to you in English. The international students were all in the same boat.”

One of those international students was Frances, an Australian who was studying Traditional Chinese Medicine. The two of them fell in love, and once they had graduated, the pair travelled to Burundi to meet Yves’ family. After the introduction, Frances returned to Australia, and they had to live apart for almost a year while Yves waited for a visa. Yves said that he found the wait very difficult.

Where many of us would draw the line at educational and emotional challenges like these, Yves’ has significant experience in overcoming terribly challenging life-situations He was seven years old in 1993, when civil war broke out in Burundi and his mother lost her life. At the time, his father was overseas, so, under the care of a family friend, Yves, his older sister, and his three younger brothers fled their home.  They spent the next two years in a refugee camp, a place where Yves says, “one looks after themselves.”

Yves credits his father for fostering his interest in learning.  His father was a teacher and emphasised the importance of education.

“I think the way to connect with my father and make him proud was through my interest in learning.”

In 2011, Yves graduated as a civil engineer (now fluent in English, French and Mandarin). He returned to his home country to put his skills to use. Helping to bring change to Burundi was a profound experience for him.

“The work we did in Burundi was for rural areas, where there was no access to electricity. I worked for a company that was building small hydroelectric dams to produce electricity.

“That was work for me that produced impactful change and changed people’s lives; I was proud of that. It meant that students could spend more time at school, as they were able to stay there with functioning lights, after dark. Furthermore our work [was essential] to smaller companies, and again, essential to [the equivalent of] the council in that area to power offices. It meant they could do the work they needed to do.

“I was there for a year. We achieved what we set out to achieve. I didn’t get to see the whole roll out of the plan, but I saw part of it and by the time I left, things were going in the right direction.”

For Yves, the right direction is the one where the community is active and engaged in driving progress. He is passionate about the relationship that a community bond provides. He found a similar sense community support here in Melbourne, in a community house where he was first informed of the Migrant Scientist programs run by Cultural Infusion.

“I had worked for Simpson Construction Co, 2013, building a water treatment plant for city west water. After my contract finished, I didn’t continue with them and I had to find work in other areas. I heard about the community house in Fawkner, and a program to introduce overseas qualified professionals to each other. I joined that community house and that’s how I arrived here, with the science communications programs.”

Yves is excited to start work on the programs and looks forward to talking to students about issues he feels are important to outline with students. There has been a drop in the interest of science-related studies in Australia and he wants to help resolve it. Yves says there are two main issues that the Migrant Science programs aim to attend to.

“There aim [of being a Science Communicator] is to equip overseas qualified professionals who are struggling to find work in their chosen field, but it is also to address another problem: the drop of interest in science fields in schools across Australia.

“The program is to design and develop presentations with different topics to showcase why Science is important, [and it is studied] by different people with different backgrounds. It is to inspire kids and to improve the idea they have of science already.”

With a story like his, Yves knows that building literal bridges is equally fulfilling as building metaphorical ones.

“I’ll be talking about the structural engineering of a bridge and why a bridge needs to be so strong. I’ll be comparing that metaphor of how you build a bridge when you cross from one culture to another culture, from a different community and a different country. I’ll draw from my own personal journey, from Burundi, to China, and to Australia, and how I built a bridge between those places.

“I also want to convey the message that science doesn’t have to be boring, that you can study science and do exciting stuff, depending on what profession you choose, life is exciting. If that’s a fear [that students have] then that is what I want to address.”

We look forward to Yves’ contributions to the Migrant Science Communicator Accelerator Program. This initiative was run by Cultural Infusion, the Royal Society of Victoria, and the Australian Science Communicators, with the support of the Inner North Community Foundation and the Scanlon Foundation. We will soon celebrate its successful completion, so stay tuned.