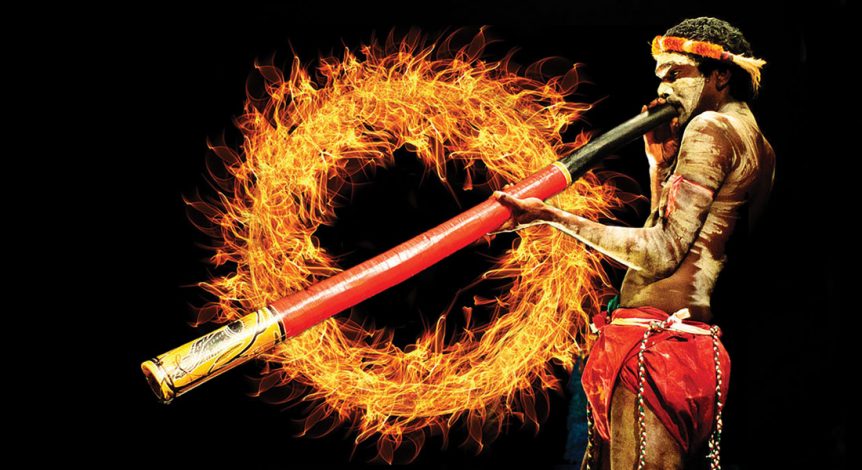 Why can a didgeridoo levitate a $20 note? Cultural Infusion presents a new and exciting show based on original research of Lloyd Hollenberg, professor of theoretical physics at the Melbourne University. Answering the questions you never even thought to ask.

The didgeridoo is as simple as it is complex. The simple part is the instrument itself: a pipe made from a branch that has been hollowed out by termites. The complexity is created by the human players and how they produce the sound

The didgeridoo is one of the oldest wind instruments, however the physical and acoustical properties are new fields of study. The first scientific paper on the didgeridoo was written by Dr Neville Fletcher as late as 1983 – “Acoustics of the Australian didjeridu”, Australian Aboriginal Studies. Professor Lloyd Hollenberg and his team also made a huge contribution when they produced a live image of the geometry of the mouth cavity and vocal tract of a didgeridoo player. For that he used a magnetic resonance imaging (MRI) machine.

His results allow increasing the understanding of what a didgeridoo player is doing to produce the sound, and how that interacts with the instrument. Astonishingly, the level of noise in a didgeridoo player’s mouth can be louder than a jackhammer!

Soundwaves don’t just travel down the didgeridoo; they also bounce back when they reach the end, creating very complex resonances. These bouncing soundwaves then create a vibrating column of air. You $20 note will not be blown away, as you would imagine, but is levitated with soundwaves.

Cultural Infusion has created an exciting new education show based on Professor Hollenberg’s research. The Science of the Didgeridoo provides students with a vibrant introduction to sound and soundwaves, as well as completely new perspectives on Aboriginal culture.

The show concludes with a beautiful experiment involving the didgeridoo and a barbecue – your students will never think about sound in the same way again!