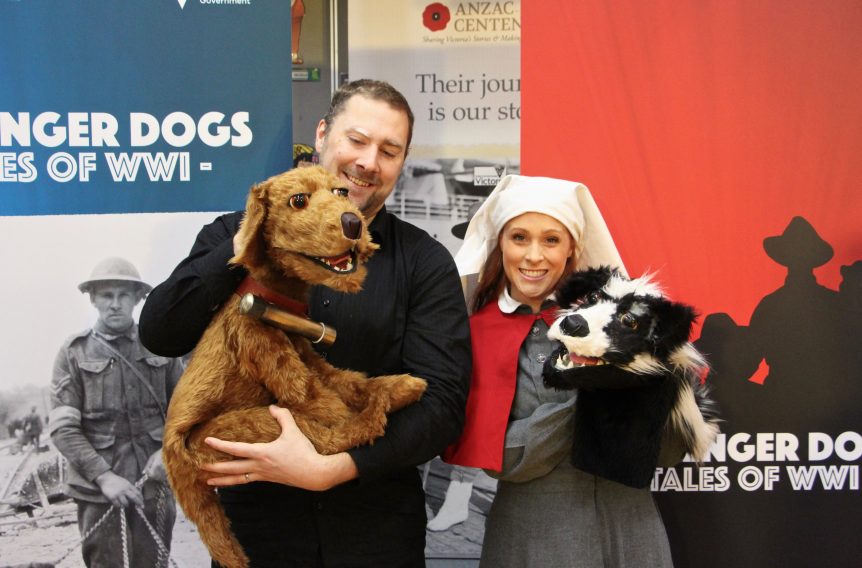 Lyall Morris and Rebecca Fortuna have learned a lot about kids in the last year. As actors, they have now been touring Messenger Dogs: Tales of World War One, for an entire year, they have been able to get a whole new perspective on how children engage with theatre. Messenger Dogs tells the story of Nell, Tick and Bullet – three dogs responsible for bringing messages from headquarters to the front lines.

The show is free for all Victorian schools to experience the gripping tale of courage, friendship and willpower.

The show is suitable for students for from prep to grade 6.

As Rebecca Fortuna said, “Older kids understand that the show is about WWI” and the younger kids eventually pick up the story as it goes on. By the end of the show, the kids can fully understand the story and reflect on what they have learned.

Puppets are used to interact with the audience but to also engage them. It has been a great tool for the actors to help kids learn. When the dogs are first introduced, there are different reactions from the kids.

“There is a bit of excitement and awe when Nell sticks her head out the first time, sometimes they jump a little when Trick first talks, and typically Bullet is met with laughter”, Lyall said. “[Puppets] help remove a level of reality, and create a new level of relationship”.

Messenger Dogs seems to excite the imagination of young students. Taking a jump back into the early 20th century history can be a bore, but by using the puppets, the kids can really fill in the gaps and imagine a whole different era.

Lyall and Rebecca both excited talking about the show’s characters and the kids’ reactions, the different personalities of the Messenger Dogs, to the explosions – a gluten-free mix of rice bubbles and quinoa – which both startle and fascinate the kids.

Both actors say that the visual element of the show, and exciting story line, is how they have been able to turn WWI into something that kids love.

They have learned that getting the kids actively involved, and up off their feet, encourages them to learn. The saying “Actions speak louder than words” is how Rebecca described children’s learning. Both actors have learned that having an element of surprise draws their attention.

Kids like “humor and a good story” Lyall said.

The production is intended to open a dialogue about the events of WWI to kids.

It has been 100 years since WWI, and the show hines a spotlight on the brave soldiers and dogs who assisted them. “Without students being taught about it in schools the stories can’t live on and will become legend instead of our history” says Fortuna.

The show has proven to be a hit with the students and teachers and has been called back for another year. The response has been incredibly positive.

“We are consistently given really sincere positive feedback, which is really humbling” said Lyall, who has found that the audience always finds different elements of the show and connect with. Each audience takes something different away.

Rebecca said that “for such a vast age group to be so engaged and each get something different from the experience was truly humbling and so exciting”.

Their experience performing the production to primary aged students has ultimately changed their perception on children’s learning. For the kids, understanding the importance of WWI in Australian history and the values of friendship and strength brought about from WWI can impact generations to come. It seems like this production has got everything which keeps students and teachers budding for more and the actors excited to teach kids about our important history.

Messenger Dogs can be booked directly through the Anzac Centennary http://anzaccentenary.vic.gov.au/messenger-dogs-tales-wwi/.