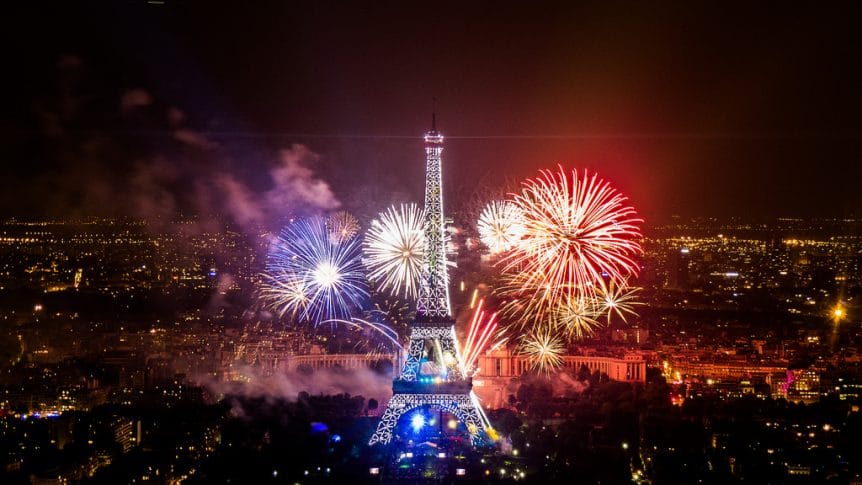 What is Bastille Day?

Bastille Day marks the storming of Bastille prison on the 14th of July 1789, an act of rebellion against the autocratic monarch and elitist groups who exerted their influence over France.  It also celebrates Fête de la Fédération which was the first celebration of Bastille Day in 1790. Since 1880, it has been recognized as a public holiday.

What do they celebrate?

According to the national myth, France was mired in fear and anger against the nobility and clergy, who abused their power and kept the deceptive and tyrannical King Louis XVI in power. It was a society based on class and power, leaving a majority of people left in poor economic and social conditions.

Revolutionary fervor had been brewing long before the storming of the Bastille. France’s poor economic state and corrupt tax system lay heavy burdens upon the lower and middle class, while exempting the nobility and clergy. Social conditions were declining, thanks (very ironically) to King Louis having taken on massive debt to defeat Britain by – oh dear! – financing the American Revolution.

The Bastille, an 18th Century prison and fortress, represented the stronghold of royal authority in Paris and oppression of the Third Estate, made up of commoners and bourgeoisie. On the 14th of July, a crowd of commoners broke into the Bastille leading a violent standoff between royalists and the people.

Ironically, they only managed to free a handful of criminals, and the missed out on freeing the notorious Marquis De Sade (who gave us the English word for ‘sadism’).  De Sade had been imprisoned in the Bastille until a few days before, when he was transferred to an insane asylum.

Why is Bastille Day important?

Bastille Day marks the turning point of the French Revolution and symbolizes a growth of power amongst the common people who eventually lead an uprising against the feudal system.

This led to the full recognition of democracy and liberty in the rights of law through the Declaration of Rights of Man and the initiation of a constitutional monarchy. And the Women’s March, where 7,000 women marched to Versailles to petition against the poor economic situation and for King Louis to move to Paris.

Every year, French citizens come together to celebrate Bastille Day, a day to rejoice in the successes and culture of France. The day is a celebration of patriotism and the values of ‘liberty, equality and fraternity’, rather than the battle itself.

What Bastille Day events are there around Australia?

Bastille Day events are taking over North Melbourne’s Meat Market from the 15th-16th of July. The French Food Market will be featuring pastries, crepes and best of French cheese. Not only will you be able to listen in on food master classes, French language lessons but come along to watch exclusive French film screenings.

Sydney’s Bastille Day Celebration welcomes you to a fun-filled night of French dancing, DJ’s, drinks and food at the Argyle in the Rocks. Walk around to find yourself open to a wide range of activities showcasing French culture, open until the late night.