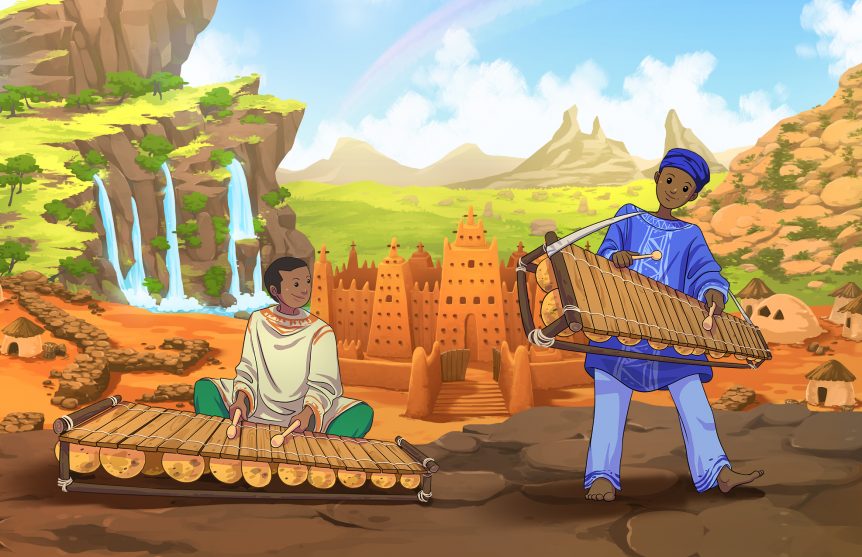 Meet the Griots
Did you learn history from a book or from a movie? In many cultures histories are told through spoken stories instead. They were often accompanied by music in what is called the oral tradition. In medieval times Europe had bards and troubadours, in ancient Greece the Rhapsodes and in Aboriginal society, songmen. In Northwest Africa are the ‘Griots,’ the French name for people who retell the history of this region dating back thousands of years. They are also eminent musicians, many of whom have gone onto international fame. They are not only entertainers and historians but central to the culture of their society.

Oral History: one song at a time
When piecing together the history of the three great empires of the medieval era of the region, historians compared the songs of the griots with ancient written accounts from Arab scholars in order to find a more accurate history.
The Griots learn a craft of music and communication that has been passed down from generation to generation. In the words of modern day Griot Mamadou Kouyate:

I derive my knowledge from my father… who also got it from his father; I know the list of sovereigns who succeeded the throne of Mal. I know how the black people divided into [twelve] tribes… I know why such and such is called Kamara, another Keita, and yet another Sidibe or Traore…

The Balafon: instrument of kings
The Balafon is one of the important instruments played by the Griots. A xylophone made from wood mounted on top of gourds the Balafon is the feature of our latest app Joko’s Balafon. It was once an instrument only played for kings. It was fixed into the ground over holes to help the sound reverberate. It is made portable now through the use of gourds (pictured) which serve as the resonators.
Every king had to have a Griot as his advisor. If a king were to seek advice from any other nobleman he could be accused of favoritism or drawn into vendettas or intrigue. The Griots, whose only commodity was music, could be trusted as they would not to try to influence the king for personal or family gain. The Griots have their place beside kings even in the most famous of epic tales.

The Real Lion King
The most famous historical stories the Griots perform are of the Lion King Sundiata. The Disney story of the Lion King has many parallels to the tales of King Sundiata and was possibly the inspiration for the movie. Sundiata was the first Musa, meaning the king of kings or emperor of the Malian empire. Sundiata had a Griot called Bala Fasseke who played an important role in helping him become the ruler of one of the largest empires of African history.

In one of the tales Bala Fasseke sneaks into the chamber of the sorcerer king Soumaoro who is holding him and Sundiata’s sister captive. There are a number of magical objects, one of which is a Balafon. Bala Fasseke cannot help but to play the great instrument but Soumaoro catches him in the act. Acting quickly, he improvises a song that impresses Soumaoro so much he decides to spare Bala’s life. Bala is vital in assisting Sundiata overcome Soumaoro which explains the importance of the Balafon to the royal courts.

Music diplomats
Griots don’t work for kings and aristocrats exclusively. They also play important roles in villages. Griots are used to recite the history of births and deaths, battles and marriages in a village. Griots are also called upon to act as negotiators. Their mastery of communication is well known, not only in the choice of words but in the ways they speak them, refined by their practice of the expressive qualities of music.

“[There is a ] Mande proverb …“speech is not in people’s hands, people are in the hands of speech.” We may choose our words, but we cannot control how they are understood, or what effects they have once they are communicated [just] by the word itself… [Meaning] it is hoped, will be transmitted by the way the word is spoken, by the context in which it is used, by the expressiveness with which it is uttered.”

Many believe that only a small percentage of communication is linguistic, meaning that the words only play a tiny part in how we are understood by others. Musical and physical aspects of communication; volume, pitch, tempo, emotional register, context, facial expression, eye contact, and other forms of body language affect how the content of communication is understood. As practiced musicians and performers, Griots were known for wielding power in the use of these expressive techniques for communication.

Do you want to discover what music can do for your your expressive abilities?
Do you want to learn more about the Griots and the Balafon?
Learn more with our interactive guidebook and learn traditional Griot songs by playing fun video games with Joko’s Balafon.