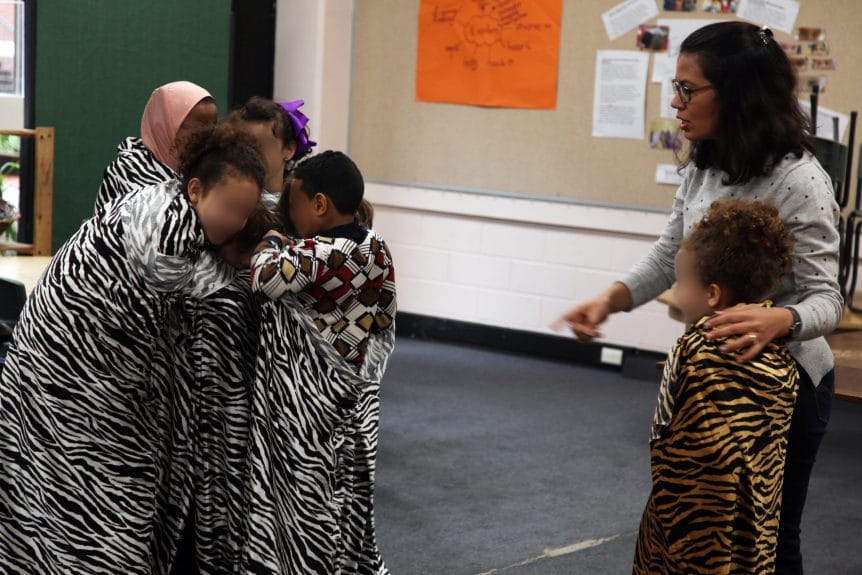 As a curious child, Tunisian-born Imen Saidi wanted to know the truth about everything; birds and bees and babies. Her parents’ claim to have ‘found her’ just wasn’t convincing. Her curiosity about the natural world led to her career as a biologist, a geologist, and a teacher in both of these sciences. This year, Imen will bring her enthusiasm for science and nature to Cultural Infusions’ Migrant Science Communicator Accelerator Program. Imen has developed a beautiful presentation for lower primary students about camouflage.

“As a child, my favourite thing to do was experiment. With theory and practical work, [the result] becomes tangible, the experience of doing a practical experiment is so exciting and memorable. I always believed my teacher, but it was so different to get those results myself.”

Imen’s parents were very encouraging and they made many sacrifices so she would do well with her studies. Perhaps influenced by her father, a physicist, her exceptional grades in school came as a result of both her hard work and their nurturing. Pay-off came in the form of being accepted into the course she dreamed of.  She took on a Bachelor of Science at the University of Science, Bizerte, where she studied geology and biology. She later, took her masters in hydrobiology.

“Part of my studies involved observing a river that started in Algeria, going to Tunisia. At every station we had to study the salinity, PH levels, and the kinds of microorganisms that were living there. I was fascinated by everything I saw.”

She graduated after 5 ½ years and was searching for local work opportunities when a teacher she had great respect for and remained in touch with, Madame Noura, called her with a surprising opportunity. She wanted to talk about her husband’s brother-in-law Chokri, who lived in Australia.

Imen was shocked, but she trusted Madame Noura implicitly. Madame Noura and Imen’s father, (who worked with Madame Noura at the University) arranged for Imen and Chokri to meet. The pair got to know each other for three months; Imen was impressed by how open, supportive and caring Chokri was. With her father’s blessing, and after careful consideration, they were engaged.

So, in 2010, as a 27 year old, Imen found herself facing a new journey, one of love. Imen waited for 12 months while her VISA was processed, and then she came to Melbourne join Chokri. She was anxious about what her new life would be like, but true to her nature, she was eager to get some practical experience once she arrived.

Imen arrived in Melbourne to a typical southern summer, boiling one day and freezing the next.  In Tunisia, there were always people on any street, the wildlife was familiar, and climate was reliable. So life in Australia shocked her immediately. But she loved it, and it was better than she had expected. She wanted to settle and find work immediately.

“I was looking for work and the Government offered 500 hours [of English language tuition] to new migrants. I did the course, and my teacher said, ‘Imen, you speak three languages, I wonder if you would like to make an application for Census Australia?’ So, I got my first job, just six months after arriving in Australia.”

Imen’s job was to assist callers with queries about the 2016 Census. She was told that she would be answering queries in Arabic (her first language) and French (Tunisia’s official language). But the reality was very different. There were only a handful of calls in Arabic and there were no calls in French. Rather all calls were from English-speaking people. Imen struggled, especially with the Australian tendency to use slang.

“I had a few struggles, once for example, I didn’t understand ‘deceased’ as a term [in English]. In French language, deceased does not mean dead, but rather sick. A caller said his friend who is deceased received the Census form under the doormat, what do we do in this case? I told him I was happy to organise someone to help him do it, the caller asked if I was serious- then understood that I was not getting what he meant and asked to speak to my supervisor.  The supervisor explained to me that deceased meant that the person had passed away, and since then, I will never ever forget what deceased meant- he even said ‘kick the bucket’ and that was even harder. [To understand.]”

Under pressure to perform, Imen said her English improved very quickly.  However the position was temporary and after 4 months, she found herself looking for a new job. She applied, unsuccessfully, for many positions in biology and geology, but eventually secured work at Myer in the City. She worked there for a year before having her first child, in 2012.

Her second child was born in 2015, and in-between Imen encountered one of the curses of the qualified migrant. She couldn’t get a job, because she didn’t have local experience. She decided to return to study and encountered the second curse; the IELTS test, which is used to identify someone’s level of proficiency in English. She would need a score of 8.5 out of 9 in her third language!

“I love science- I love it. But I couldn’t find a way to get a job about science. I found out about the program [Cultural Infusion] on Facebook, my friend shared it. I looked at it and I put a lot of hope on it. I thought  ‘This is what I am looking for, it’s the right time…’

“Applying for the program wasn’t easy, there were lots of questions to answer, 2500 words…but answering all those questions made me realise this is something I wanted to do. I put a lot of hope on it. I was very keen to be one of the communicators.”

Imen’s successful application has made it possible for her to re-enter the workforce and to open discussions up about her true passion. The programs provide her with an opportunity to encourage kids to be involved, and know science as a world of fun and enjoyment in the way she has known it. Imen has developed a beautiful education program for lower primary students about camouflage.

“Science is an endless world, and there are so many things to find out. The more you find out, the more you will fall in love with it!”