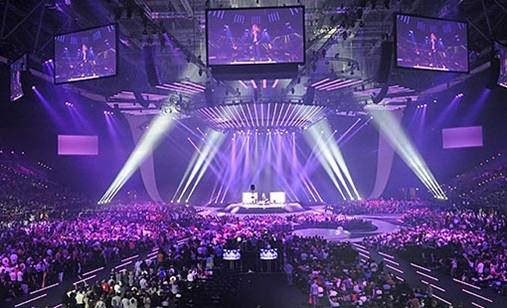 This evening – as per very recent and extremely unusual – Australia gets to be part of  Europe.  Yes, on the 9th of May (5am AEST Wednesday 10 May (Australia votes)) the 2016 X Factor winner Isaiah Firebrace will compete for Australia in the first semi-final of the Eurovision song contest. There are 18 countries in each semi-final and only 10 will go on to compete in the final.

Throughout its history, the Eurovision has taken place in spring in the Europe, and since the ‘90s they have held the final close to the 9th of May. This date has had a long impact on history, global and Australian.

Cultural Infusion’s headquarters are based in Melbourne, but did you know that the First Australian Parliament opened in Melbourne on the 9th of May 1901? The Parliament did not stay for long in Melbourne, moving to Canberra in 1927, but opening its doors on the same day.

The 9th of May 1945 also meant the end of World War II in the former Soviet Union, which is celebrated on the 8th in Western Europe. It was also the day that Germany surrendered unconditionally. Also, British forces liberated the Channel Islands.

In 1950, in a Europe still recovering from the war, the Frenchman Robert Schuman presented a proposal for all Europeans to come together, acknowledging that it “requires the elimination of the age-old opposition of France and Germany”. By doing working together with German Chancellor Konrad Adenauer, he laid the foundation of what is, today, the European Union.

One of the main points in The Schuman Declaration, as it came to be known, was encouraging world peace.  The European Broadcasting Committee tried to find a light hearted way to bring people together, to encourage cultural understating. They came up with the idea of a song contest and that is how the Eurovision Song Contest was born in 1956. The voting system does not let you vote for your own country, making it more inclusive and exciting. Since 2000, it has been broadcast online, making it a global event.

By competing in the Eurovision, Australia participates in an event that speaks to us all, using music (OK, sometimes very bad music). It also lets Australians experience some of their cultural roots and start conversations about their mixed heritage.

As you follow the Eurovision and support your favourite song and country, remember to acknowledge follow Eurovision tradition and vote according to cultural bias as well as the quality of the song. It’s just cruel for the Australia to give the British entrant ‘nil point’ – again.

To experience their musical heritage in class at school, at a company event, or at any special celebration, we recommend these programmes:

Experience the European Heritage and don’t forget to vote for your favourite at Eurovision! Let us hope Europe will love Isaiah as much as we do!